OSiRIS and SLATE at SC18 Storage and Edge services demo

SLATE (Services Layer At The Edge) aims to provide a platform for deploying scientific services across national and international infrastructures. At SC18 they demonstrated their containerized Xcache service using a 50 TB Rados Block Device hosted by OSiRIS in a pool overlaid by our Ceph cache tier at SC18. 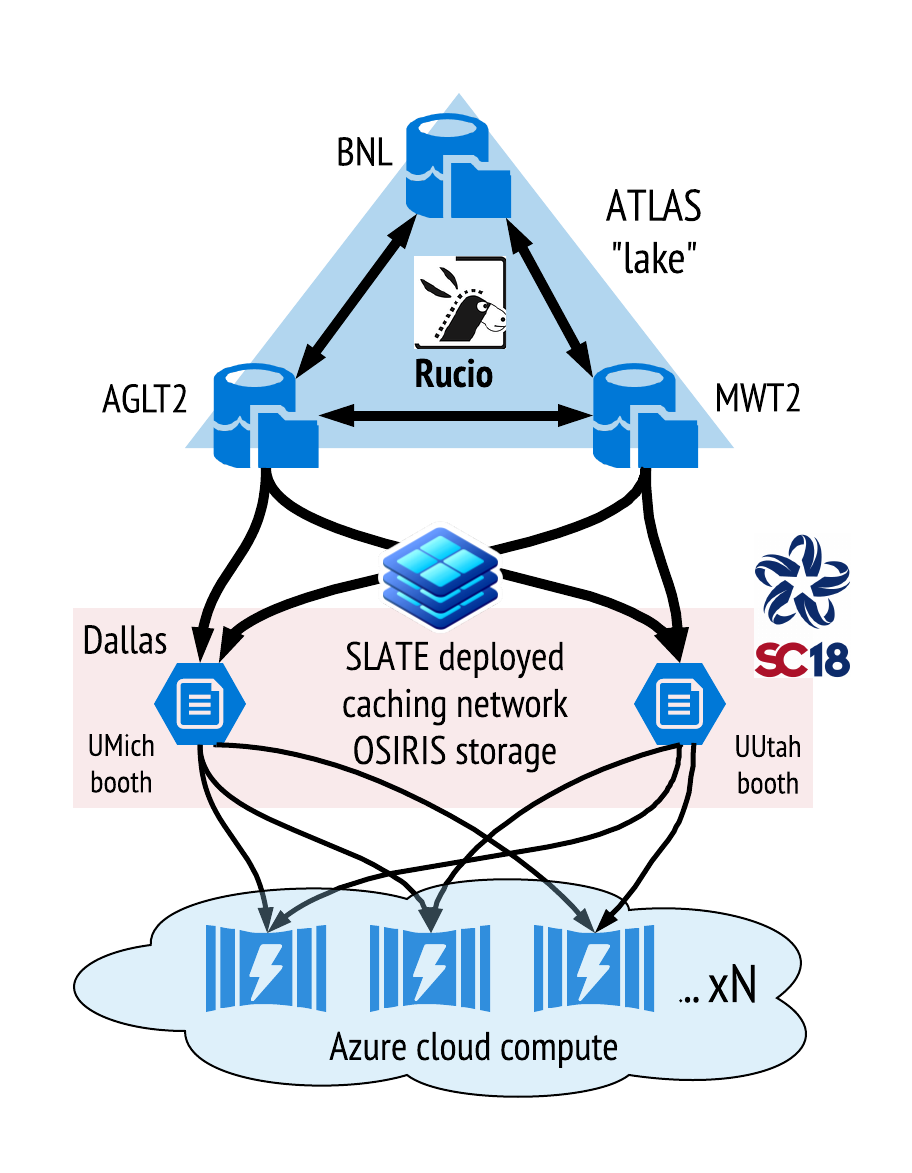 For OSiRIS this usage provided an opportunity for experience with RBD devices overlaid with a cache tier as well as a stress test for accessing cache tier devices hosting multiple tier pools for multiple access methods. In addition to the SLATE RBD cache pool our tier storage hardware also had mapped to it a pool for RGW, CephFS, and RADOS.

The SLATE group also leveraged local NVMe storage in combination with ZFS to improve read and write performance beyond what a network device is capable of. This configuration is readily applicable to a variety of RBD workloads with or without a cache tier involved. 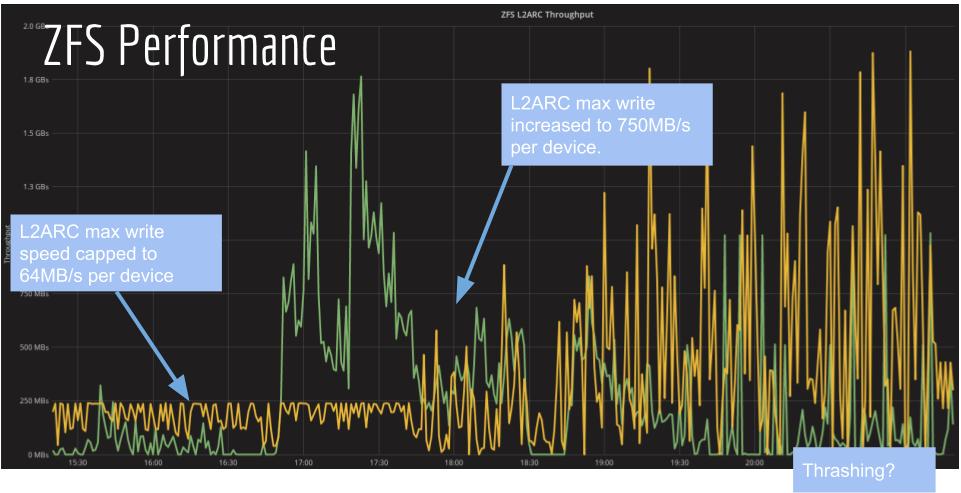 From the OSiRIS perspective the behaviour of the cache was somewhat predictable - but that’s good! We didn’t encounter any issues and the plots of RBD device throughput when compared to the Ceph pool throughput generally indicate that the RBD usage stayed entirely within the cache at SC18. We see some cache flushing to the backing pool but this was transparent to the RBD device in terms of performance impact. As far as we are concerned this very well demonstrates that a cache like this is an excellent fit for bringing higher performance to locations with higher latency to our primary storage elements. 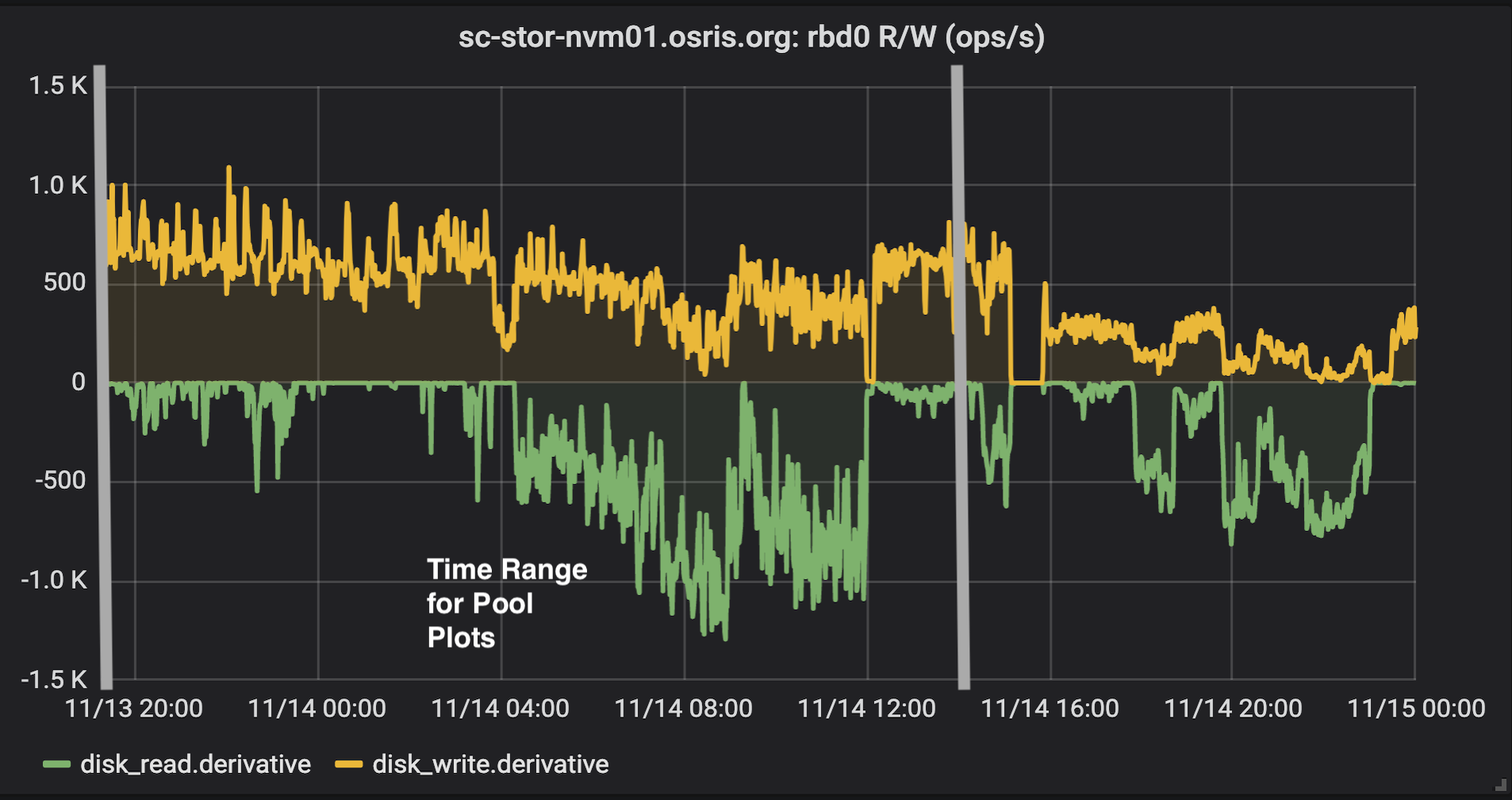 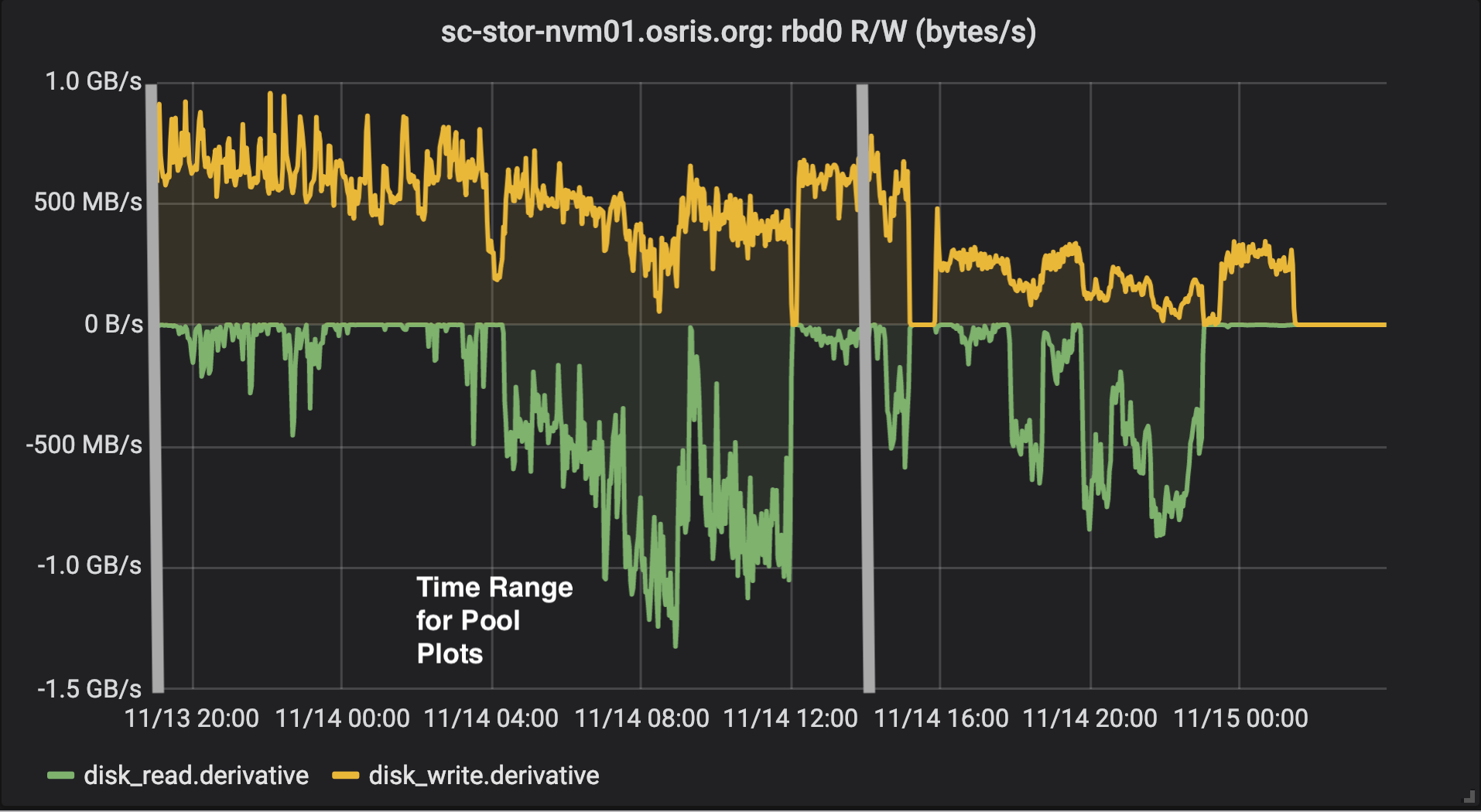 The plots below of pool throughput and bytes used verify our RBD device is doing I/O entirely to the cache tier while the cache tier is busily flushing objects to the backing pool. 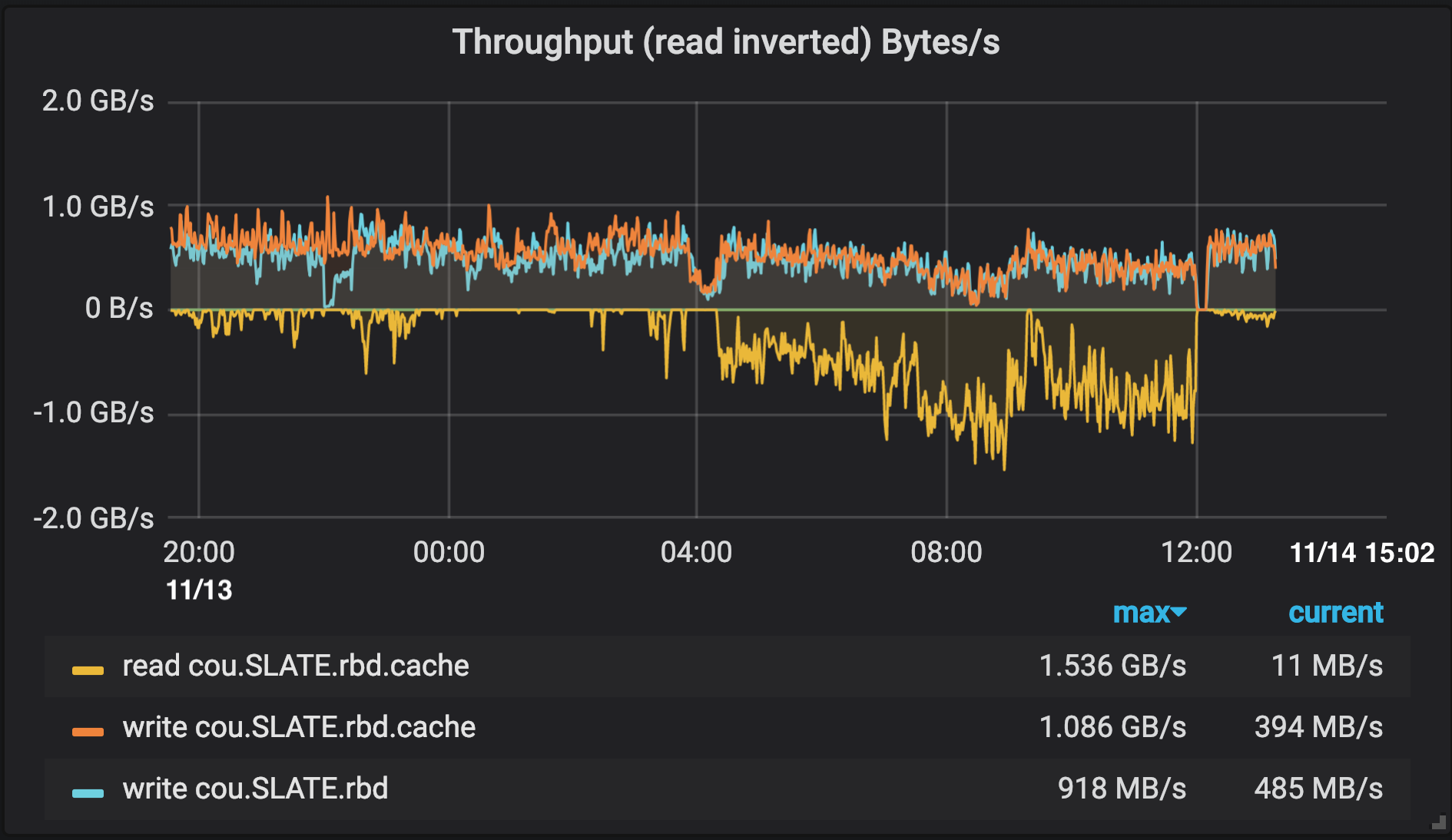 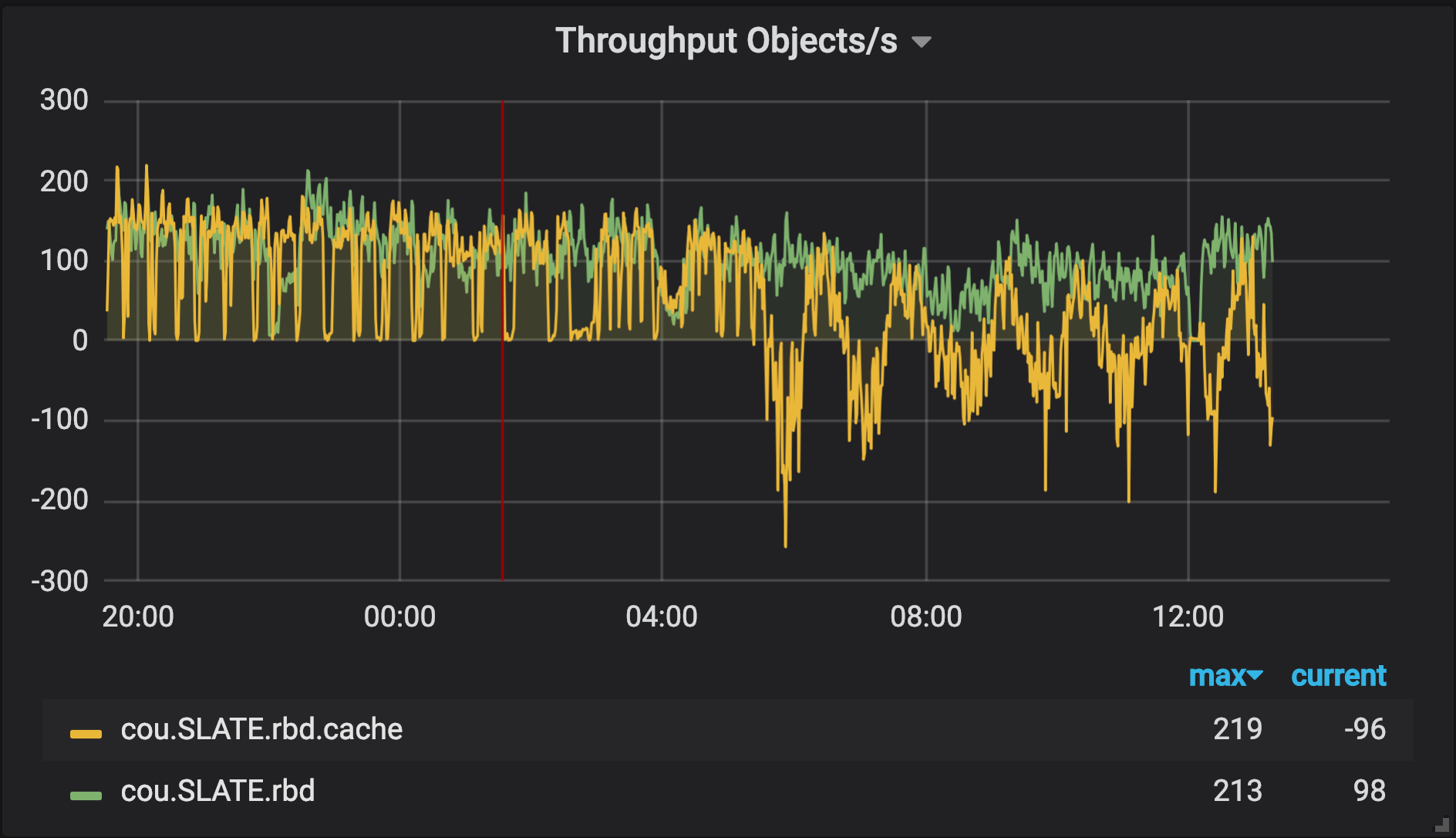 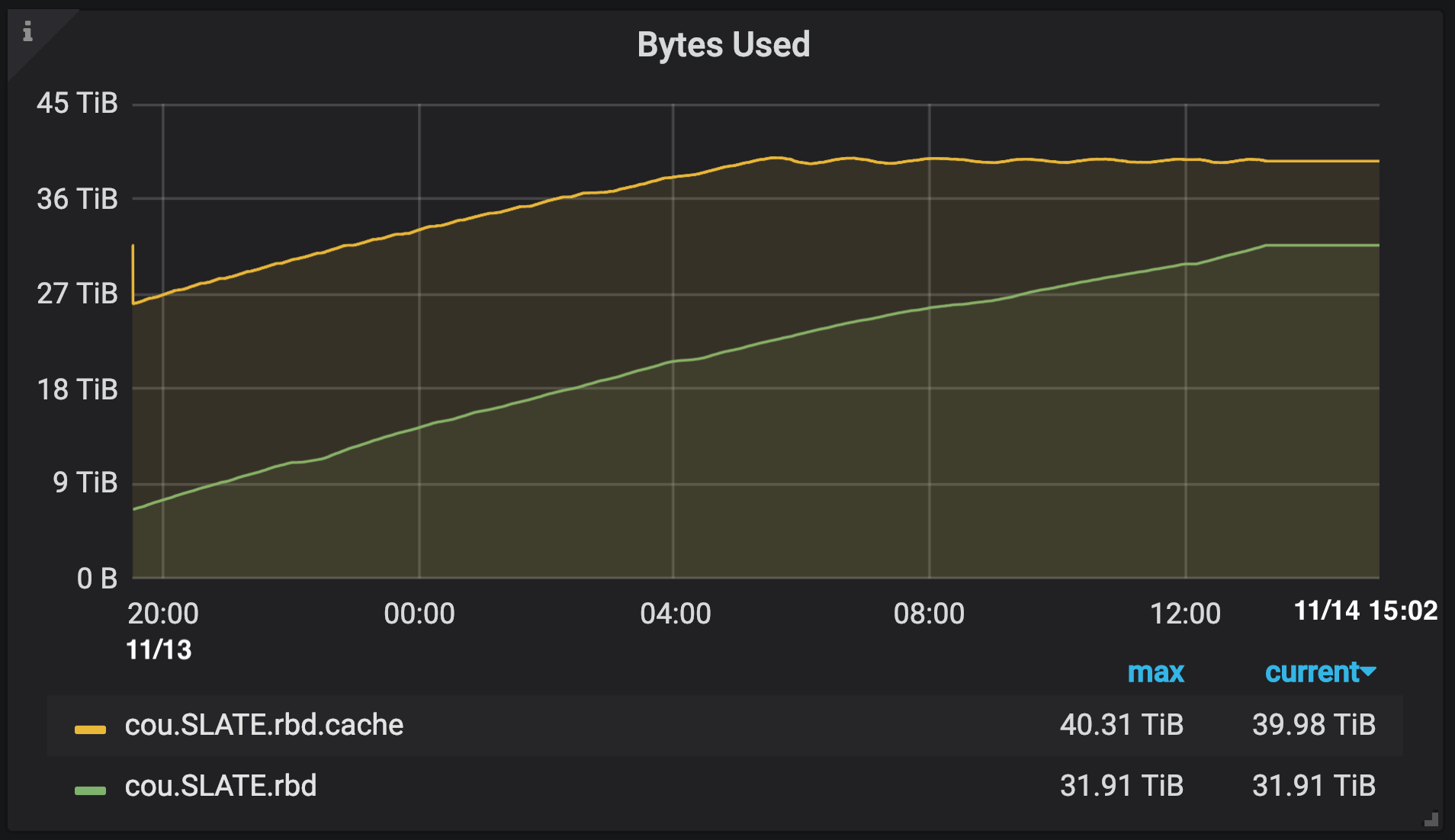 To begin with we create two pools. One is our standard COU (virtual org) pool created by our COmanage Ceph Provisioner. This pool is by default replicated to our 3 main storage sites at UM, MSU, and WSU. The 2nd pool is the cache pool which we want to be replicated only on hosts at Supercomputing.

Then we can proceed to add the new tier pool as an overlay to the cou.SLATE.rbd backing pool in write-back mode:

We also need to set a maximum number of bytes for the pool. This will be used by the various _ratio settings and to stop I/O to the pool when it reaches the limit. You want to ensure the pool will stop I/O before it overfills OSD.

The following numbers for dirty and full ratio are the defaults. They seemed to make sense for our application where we would like to have the cache mostly full (high full_ratio) but do need to ensure there is space for any writes to avoid waiting for the lower latency link back to Michigan (lower dirty_ratio). If we really wanted to aggressively make sure there is writable space in the cache we would set lower ratios but the SLATE xcache is a read-heavy application once it has written enough data to operate as an effective cache.